Flood Story: The Fenced Colony and the Barney-Smith Car Company 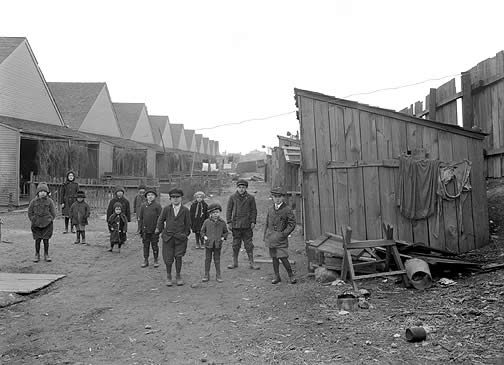 One of the least talked about stories of the Great 1913 Flood involves the small community in Old North Dayton called The Kossuth Colony. Organized by Jacob Moskowitz, a Pittsburgh based developer, the colony was the third he established to find, recruit, house and sustain a group of skilled workers for a specific company.

Moskowitz had put together a similar project for Malleable Iron Works on the West side of Dayton in the late 1890’s. In 1906, in a four block area, he built 40 doubles with five rooms to a side to bring 200 Hungarian welders and steel workers to work at Barney and Smith Train Car Company. Surrounded by a 12 foot tall wooden fence, the all inclusive colony had its own bank, grocery and general store, travel agency for booking passages to and from the old country, and Dayton’s largest tavern for the men to enjoy after work.

The colony had its own brass “script” coins and credit given by the company was how the men were paid for their work. Church services for the mostly Roman Catholic families were first held in one of the homes with visiting priests from Holy Name and Holy Rosary Church until the colony founded St Stephens Church. Doctors, lawyers and other professionals on Moskowitzs’ approved list would come into the colony as needed. There were rules against shopping outside the colony and those who violated them lost their jobs and their homes. The conditions within the colony were better than what the people had back in their homeland, so they were mostly content.

When the Flood of 1913 came, the men on first shift for Tuesday morning had, as usual, walked to work at the factory about a mile away. It soon became clear that the Barney and Smith would be completely devastated by the raging waters. Many of the men still in the colony tore down the wooden fence and quickly built rafts to rescue their fellow workers and many others stranded by the flood. The fence was never rebuilt and Barney and Smith Car Company never recovered from their losses.

This Train is Bound for Glory: The Story of America’s Chapel Cars, Chapters 13 & 14